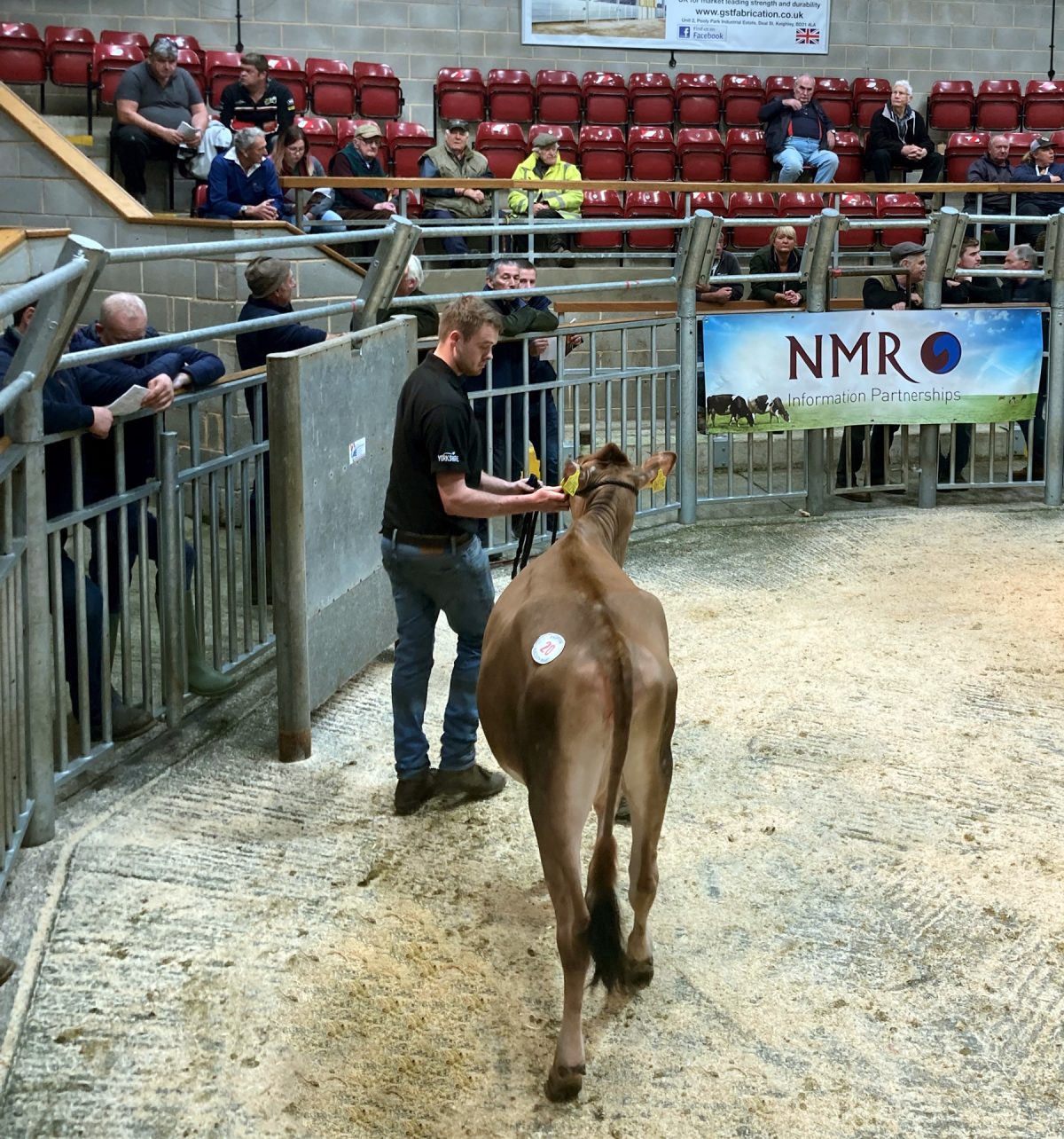 With this time of year resonating with the golden colours of Autumn the latest Craven Dairy Auction at CCM Skipton did similarly with a fine entry of over 40 lots sold to include Holsteins, Ayrshire, Red and White Holstein and the Autumn Jersey sale, held for the third time and again sold by leading breed auctioneer Mark Davis, of Devon-based Kivells.

The main event was the Autumn coloured breeds sale, which was dominated by Jerseys and drew sellers from Scotland down to Shropshire. While many ringside had travelled long distances others were able to bid from the comfort of their own homes via the increasingly popular online platform, with potential purchasers from seven counties in England and Scotland registered on the sales sheet.

While buyers were selective, all but two lots forward headed to new homes. Trade peaked at £2,100 for a widely admired long, hard-topped calf showing great udder potential and ready to compete at the forthcoming All Breeds All Britain Calf Show at Peterborough in mid-October.

Well presented by Ben Coates, and his parents, Stephen and Rachel, who run Regatta Jerseys in Baildon, this November, 2020, heifer sired by Video is a maternal sister to the Champion Jersey Heifer in Milk from this year’s Great Yorkshire Show and is from an EX91 7500kg plus dam. As well as being a potential fifth generation VG or EX, she stays in Yorkshire, heading to a new young enthusiast, Izzy Lee, of Easingwold.

Milking cows and heifers in the Jerseys were a solid trade without featuring any standout prices. They peaked at £1,890 for Bayview Disco Eliza 14 from the Pye family, who run Bayview Jerseys in Arkholme, Carnforth. Fresh since mid-August and giving over 23kg per day, with nine generations of VG or EX behind her, she heads to the Richardson family in Doncaster.

The reserve champion on the day came from Ayrshire father and son, Robert and Douglas Buchanan, who run Tintoview Jerseys in Ballantrae, Garvan, with their two-year-old heifer, Tintoview Headliner Camilia, by Enderbyhill Headliner and herself freshly calved in August. Giving over 26kg, she sold for £1,733.  Five freshly calved Jersey heifers averaged £1,712, while three fresh Jersey cows averaged £1,050.

Trade of the day in the Jersey ring was for a batch of in-calf heifers from the high yielding, high health status Elvington, near York-based Greyleys herd of David and Anne Shaw, and daughter and son-in-law, Helen and Craig Stanier. Their five-strong consignment averaged £1,617, four of which were the choice of the day’s volume buyers, Graham Maxwell and family, who have recently established a Jersey herd at Castle Douglas.

CCM says it further intends to cement its commitment to such sales by again staging both Spring and Autumn Jersey and coloured breeds fixtures in 2022.