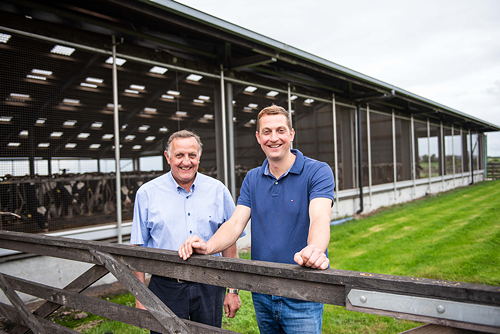 Robert runs the 180-cow Townlaw Holstein herd and 60-cow Darnlaw Jersey Herd at Darnlaw Farm, in Auchinleck near Ayr, with his parents Bryce and Anne and wife Emma.

The Sloan family has adopted a proactive approach to succession and Robert, who’s 37, became a partner in the business at 24. He admits that the mix of his youthful enthusiasm and his father’s experience and wisdom has driven the business forward in the past decade.

The herd has been based at Darnlaw for more than 40 years and in 2011 the decision was made to switch to robotic milking, in a new purpose-built shed on a greenfield site, on the farm.

“Back then we needed to start three-times-a-day milking to improve the welfare and longevity of our 120 high yielding cows, but finding staff prepared to do this and to work the antisocial hours was a challenge,” says Robert. “So we decided on installing robots in a new building,” says Robert.
The herd is housed all year round and milked through three Lely robots. “Our system works well. We employ three local men and each staff member works up to 50 hours a week – but rarely more than four and a half days a week. This gives our staff time to pursue their own interests and have time off at the weekend.

“The level of automation on our farm allows for flexible working hours with minimal anti-social labour requirements,” he adds. “Everyone has their own individual responsibilities, but they are also expected to step in and provide relief for any job on the farm. It is this diversity that keeps everyone challenged and motivated.”

Another major change and ‘diversification’ took place in 2016 when they took the opportunity to fulfil a specialist Jersey milk contract from milk buyer Graham’s Dairy and established Darnlaw Jerseys. This herd of 60 cows is run as a separate herd and milked twice a day through the original parlour, grazing in summer and housed in winter.

“We started with two robots in 2011 and added the third two years later. When we established the Jersey herd we reduced the number of Holstein cows from 220 to 180 and we stopped milking the late lactation Holstein cows through the parlour, keeping this strictly for the Jerseys,” says Robert.
The 180 Holsteins – 43 classified EX and 76 classified VG – currently in the herd milk well on the robotic system, which is reflected in their yields and longevity.

“In 2018 we had eight 100-tonne cows, a herd replacement rate of 19% and an average lifetime yield of 46,000kg. The herd was placed first on combined production and inspection in the Scottish herds competition. And we were also recognised in 2018 with a Master Breeder award from Holstein UK,” adds Robert.

Despite running two herds with different management styles, the Sloans’ priority is cattle health, welfare and longevity. All cattle are bred to maintain and improve functional type.

“Our robotic system allows us to run extended lactations on certain cows. Long, level lactation curves are a key component to the longevity of our cows, with breeding decisions and rations formulated to encourage this,” says Robert.

Further investment in new calf housing in 2018. Calves are reared in individual pens for the first seven days before being batched in groups of 20 on the automatic feeder.

Calves are weaned at 64 days old and moved as a batch with an all in-all out approach, which allows pens to be thoroughly washed, disinfected and given time to dry before the next batch. Calve growth rates average 0.89kg liveweight gain per day.

Providing a regular income stream are pedigree cattle sales, both Holstein and Jersey, which account for 15% of income and in 2018 were equivalent to more than 6ppl.

The Jerseys are usually sold as in-calf heifers, served to a polled Black Limousin bull. Holstein heifers are sold freshly calved and there is an increasing demand for robot-trained cattle as more producers are using these systems.

Cow cleanliness is a top priority and a Clusterflush system operates in the parlour with Pura steam on the robots to prevent cross contamination. Cows are bedded with sawdust and hydrated lime on mattresses. Any cases of mastitis are sampled and frozen in case of a major breakdown, to allow samples to be cultured quickly to identify the strain of mastitis that’s causing the problem.

“E-coli can be a problem here. With the removal of critically important antibiotics as a safety net for any of these cases we have started vaccinating the herd for mastitis to hopefully further prevent antibiotic usage,” says Bryce.

He also adds that lame cows and robots do not mix. “Any form of lameness is treated as an emergency. We have an extremely proactive foot health policy. Foot baths twice a week and udder cleft conditioning means that there have been no cases of digital dermatitis during the past 24 months.”
Both herds are fed a silage-based TMR. The Jerseys are fed 2kg blend and 1kg caustic wheat and topped up to yield in the parlour to a maximum of 5kg concentrate.

The Holsteins are fed 3.25kg blend, with 3.25kg of caustic wheat and 5kg of supergrain, and they are fed concentrate to yield in the robot to 12kg a day.
With heavy clay soils and 1,422mm of annual rainfall, forage is based solely on grass silage and some wholecrop spring wheat  – they make enough first-cut grass silage off 134 hectares to feed all the cows all year.

“We believe that being a family farm allows us to change direction quickly in what can be volatile market conditions. In the short term, our Jersey contract is our biggest opportunity; the milk is used for specialist high end products such as gold top milk, skyr and high protein yoghurt,” says Robert.

“With a shortage of young people entering the dairy industry, our system and work environment will hopefully encourage the next generation. And the challenging skill set we require should ultimately relate to a salary comparable to any professional career.”

Look ahead
Look out for a full farm feature on Darnlaw Jerseys in a future edition of The UKJT.