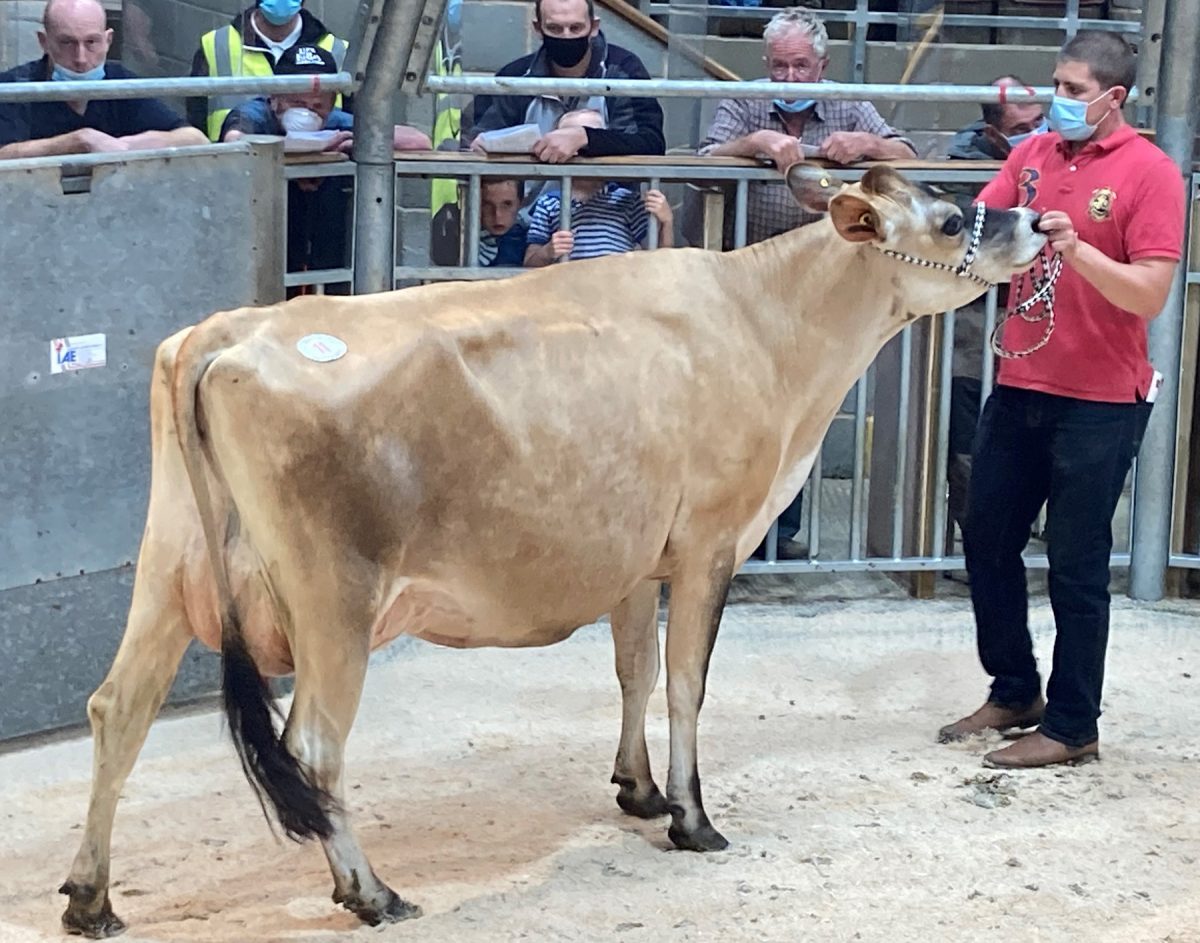 The widely anticipated first coloured breeds sale at CCM Skipton did not disappoint, with a new auction centre dairy record price established when the much admired VG88-2yrs headliner, Cherryview Legal M Lacey, was knocked down to an undisclosed buyer for 5,500gns, with her yearling daughter by Citation heading to the same home for 2,200gns.

Still giving 21kg per day, Cherryview Legal M Lacey is due again in mid-November and again to Citation, being a potential third generation straight EX for the Lacey cow family that has been so noteworthy and consistently reliable for Mrs Judith Waring, who has regrettably dispersed her Cherryview herd at Cherry Burton, Beverley.

Of the 31 animals in the dispersal portion of this sale, ranging from the seventh calver Cherryview Minister Lacey EX92-5E, who sold for 2,700gns to Richard Pilkington, Shordley – with her October 2019 daughter following to Messrs Young, Cumbria, at 2,100gns – to the March, 2020-born Cherryview Citation Lacey, a total of 17 Laceys successfully sold. Furthermore, the Cherryview dispersal averaged a whopping £1,486 per life.

CCM’s dairy sales co-ordinator Sarah Liddle said: “A packed, socially distanced and face-masked audience gathered to witness this great sale that offered much to the crowd gathered ringside, and CCM were fortunate that their perspex ‘boothing’ and online bidding facility afforded potential purchasers capacity to bid safely and view the stock on sale.”

In total, 39 buyers were recorded purchasing the 87 animals forward on the day, the volume purchaser being Andrew McKay, Newton Stewart, who bought eight. A strong Yorkshire following was in fine buying form, with other purchases also heading to Lancashire, Cumbria, Scotland, Northern Ireland, Lincolnshire, Shropshire, Cheshire, Durham and East Yorkshire.

This was said to highlight CCM’s central location in the country and many people visiting the auction site for the first time commented that they appreciated the first-class facilities available for dairy sales.

Still with the Jerseys, a group of bulling heifers from Pam Crosby’s Knayton herd near Thirsk were well sought after, in part for their high health status. These five heifers topped at £1,890 for Knayton Engineer Lark, a May, 2019, daughter of Enniskillen Engineer who travels south to Bar-M Jerseys in Staffordshire. This batch of five, including one for the vendor’s niece from the same home, averaged £1,313.

Fresh milk was as always in demand and fresh heifers from the Heath family at Ravenfield Jerseys in Cowden, Hull, sold up to £1,733 for Heslington Barcelona Stenove, while a Ribble-bred heifer from David Jones, Ormskirk, made £1,943.

Lynn Robertson, who made the long trip north from Bristol with two world-class pedigreed heifers, topped at £1,680 for Olympic Victorious Belle, bred from eight generations VG or EX, and she headed further north when among the shrewd load purchased online by the McKays. Ian Briggs, of nearby Guiseley, brought three members of his reliable Snapdragon Jersey family, including the bull, Springriver Vindicator, which sold for £945.

CCM’s general manager and auctioneer Jeremy Eaton commented: “Without doubt one of the benefits of this sale was the joint venture with Devon & Cornwall-based Kivells and we were delighted that the UK’s leading Jersey auctioneer, Mark Davis, took to the rostrum. His expertise and experience enhanced the sale, which it is hoped will be the first of many in the North of England.”

“Billed as a sale with something for everyone, this inaugural coloured breeds fixture, rescheduled from April, delivered on every level, with first class animals that have bright futures for their new owners,” added Mr Eaton.