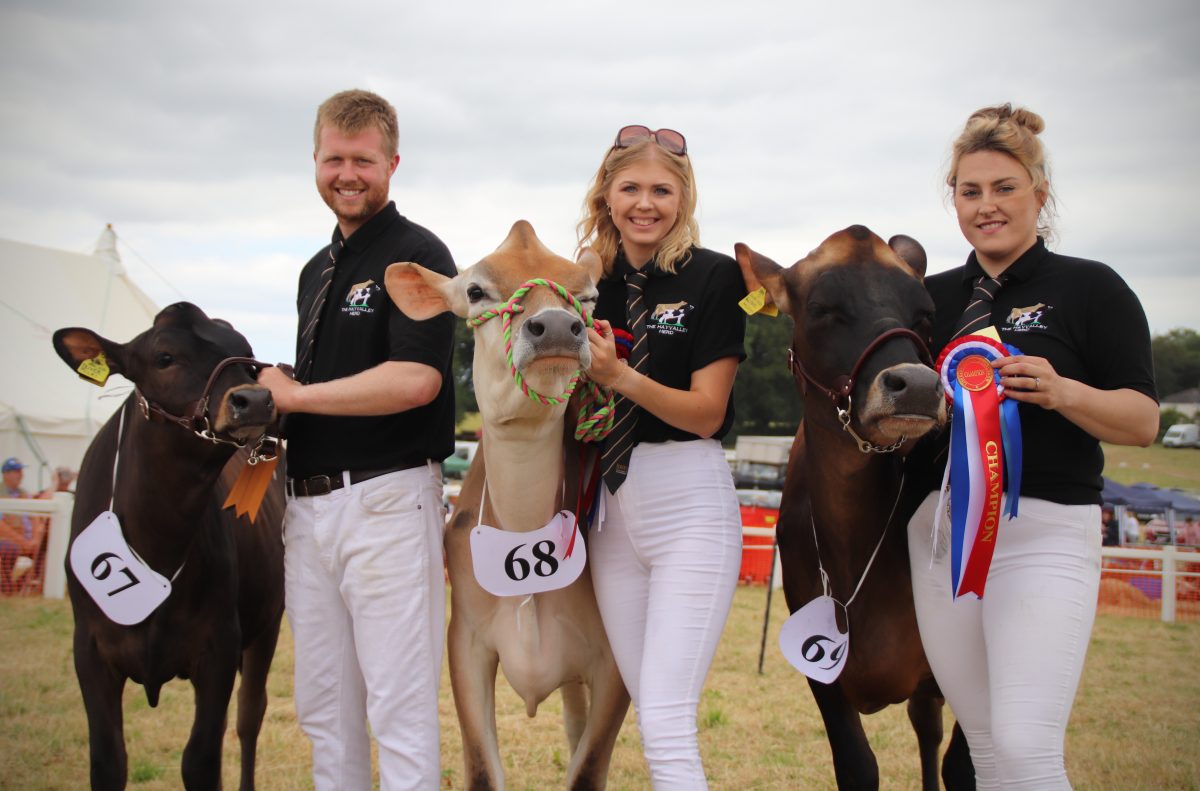 WE MILK…
150 cows mixed Jerseys and Holsteins. Combined herd average of over 13,000kgs. Milked through two robots. In 2019 we had the highest yielding Lely robots in the UK and Ireland.

HOW LONG HAVE YOU HAD PEDIGREE JERSEYS?
We purchased our first Jersey in October 2017.

LOCATION
We live on the outskirts of the small village of Quethiock near Liskeard in Cornwall.

SUPPLIES / PRODUCES
Trewithen Dairy nearby at Lostwithiel. They use 100% Cornish milk to make the famous Cornish Clotted Cream!

WHAT WAS YOUR REASON FOR CHOOSING TO MILK PEDIGREE JERSEY CATTLE?
To be honest it wasn’t planned! Ryan and I went to Sedgemoor Market to look at a Holstein heifer with a great pedigree but when we looked at her, she wasn’t for us.

As I walked down the line of milkers, a great heifer caught my eye in a pen on her own, over to one side. I looked at her pedigree and she was bred from four generations of EX and a dam that had done nearly 11,000kgs as a second calver.

This very dark coloured heifer had something about her and the size & frame to compete with our Holsteins. When the hammer fell we had purchased our first Jersey, Hennikers Global Fan Milki. We got her home and she took to the robots straight away, her yield rocketed up to peak at 38kgs a day. She went on to score VG86.

We took her to one show the following summer, although very stale she was still milking very well and came away with Interbreed Dairy Champion. She was shown in 2019 a further four times and remained unbeaten, her last outing at Yealmpton Show winning Supreme Champion; the only time in living memory that the Dairy Champion had beaten the Beef Champion.

She scored the maximum VG89 as a second, also putting up a massive yield to win the Champions Cup in the Jersey Cattle Society Milk Production Competition.

Milk has recently calved again with a beautiful heifer by Jordan and we eagerly await the Classifier, hoping to make her fifth generation EX from her. We now have nine Milki’s on the ground with no ET, just great results with sexed semen sired by Tequila, Oliver P, Craze, Barcelona, Jordan and Casino. With Milki’s oldest granddaughter by Craze due this summer to sexed Victorious to make four generations.

HOW WOULD YOU DESCRIBE THE CHARACTERISTICS OF THE JERSEY BREED AND IN PARTICULAR YOUR HERD?
For our own herd we have concentrated on great udders, excellent locomotion and a correct rump structure. We find if these key type traits are correct, production will follow. We have also tried to source great framed, deep pedigreed individuals to add to the Milki’s from the Ansom, Futuredreams, Glanmor, Honeyfields, Mydrim, Olympic and Sunnydawn herds.